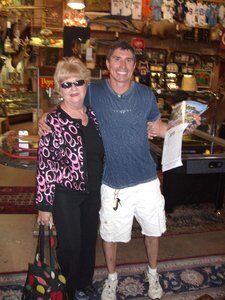 This is our experience with Gallery 63, an auction house in Atlanta that has a television program on the Discovery channel called “Auction Kings.” We wanted to try selling some things that we had for a while and had seen their television program and thought we would give them a try.

It is wise to contact them before bringing things in to make sure they will accept it for sale. We photographed ten items and emailed it to them. You can find their site at Gallery 63. There you can find all of the information you need such as auction times, location, etc. This is a big operation, so if you email them you may need to follow up with a phone call. When going to the auction gallery, you have to look carefully, and it is on a very busy street. The familiar building you see on TV is actually at the back of their property. A historic church building is street side, so it’s easy to miss.

After we had got the OK to bring some things for their next auction, we made the three hour drive to Atlanta, with our things all packed away in the car.  Being out first experience with them, we brought a variety of things. Included were a couple of pieces of furniture and the rest were “smalls” (antique speak for non furniture items.) I would suggest you do the same if you are considering sending some things to this auction, or any auction for that matter. Some auctions seem to do very well on furniture items and others  do better with art or smalls. Remember when you are considering whether to send things to auction, the big advantage is your things will most likely sell, at some price. The only exceptio0ns are they did not bring a bid or did not meet the reserve price. A reserve price is an agreed upon minimum price between the seller and the auction house. But unless it is a very special item, many auction houses will not accept items with reserves. They don’t make their commissions unless an item sells.

You always want your items to sell for high prices when you are selling, but want low prices when you are buying. The price an item will bring depends on how many people attending the auction want that particular item. It takes at least two people who want it to get the bidding above the opening bid. At most auctions, many of the people attending are dealers. They will only bid about half (or less) of what they think they can get for the item. Remember they have overhead and may have to keep the item for quite a while before selling it. So if you see an item similar to yours selling in an antique store for $100, don’t expect to get near $100 at an auction. Usually the dealer will have to discount the item, say 10%. So if they sell it for $90, they will not want to pay more than $45 and hopefully less. The economy is still slow and when it is, many dealers are not buying. Just be realistic in your expectations. User Manuals. You have to be prepared that some items may bring a lot less than you wanted, and hopefully some will do better. That was the case with our things also. We have sent many things through auction over the years, and most of the time you are disappointed in the final results. A big example for us was when we closed our antique store in Dallas. We had been antique store owners for over 25 years and had a lot of things. First we had a “store closing” sale and discounted things 50% off the price on the tag. Then we moved most of the things to our warehouse and had a big 3 day sale there, with final discounts being 70% off the original price. Then we sent most of the remaining inventory to auction. So we had to be realistic, these things had been through two sales and had been in the store inventory before that. These items had not sold, even at 70% off. So these items must not have been real desirable items, even though when we bought them we thought they were. At that point, sending these to auction was all that was left. Most of the things we took to this auction were left over from those sales and our Dallas antique store. Just because we loved these things, as they were some of the things we saved, didn’t mean others would love them like we did. 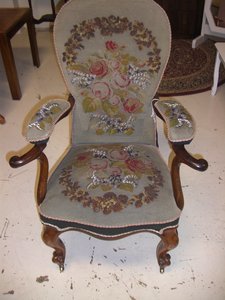 Enough with the stories, I have included a few photos of some of the things. We ended up bringing nine items to the auction. They told us the antique sampler would not bring what it was worth, which was the tenth item.  We had two pieces of furniture and seven smalls. Here is the list of items. See if you can guess what these eight items brought at auction, don’t cheat (one item has not sold.) 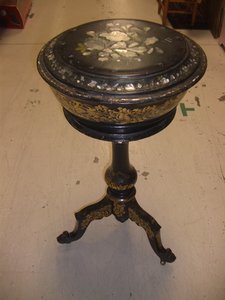 Here are some other general impressions of the auction. The staff was very friendly. As you can see from the photo, Paul, the owner took time to visit with us (my wife forgot she was wearing shades). He was thankful for the TV program which had really helped the business. He said he was a third generation antique dealer, but the antique business isn’t what it used to be. He said antique furniture was just not bringing very much and he hated accepting it because the sellers were usually disappointed. Being in the auction business he doesn’t own any of the inventory. The sellers pay a 30-35% consignment fee and the buyers pay a 15% buyers fee. So the auction makes 45-50% of the sold price of each item. But as I said this is a big operation with lots of employees and overhead, so it is an expensive operation to run.

If you have ever watched “Auction Kings” on Discovery, you know they love the unusual things. When we were there the gallery was full of unusual items. There are a couple of photos of the merchandise getting ready to be auctioned, or maybe I will do a short video of all the things we brought and the photos of the auction house.

We enjoyed our visit to Gallery 63. As far as the results of our items being sold, we were very pleasantly surprised at what one item brought and extremely disappointed with another item (can you guess which ones.) The other items were about what we expected, although we had hoped for more.

Here is the video of our visit.

Here are the auction results for our items.

The overall results were actually more than we expected because of the high price paid for the tea poy. If you are not familiar with this, let me give you a brief description and history. During the mid to late 1800’s, papier mache was very popular both in decorative items like large trays and also furniture. You can see the oriental influence in the design. Tea at this time was very expensive and was often locked for protection. Most of the time tea was kept in small boxes known as tea caddies. But some wealthy households had these large tea poys and are quite hard to find. The top opens to reveal two covered storage containers to keep two kinds of tea as well as a glass bowl to mix the teas for a custom blend.  So you will not see many of these come through an American auction, most are kept in England. The English still prefer a hot cup of tea to coffee. The bid price was actually higher than what we had it marked in our store. The Victorian chair with all of the beautiful bead work, the photo does not do it justice was the big disappointment. But Victorian furniture is just not near as popular as it was several years ago. This chair was originally priced around $4000 and cost about $1500 in England. The price had been reduced several times and had been in our inventory for at least seven years. But it was still hard to see it bring so little, but I was afraid of that kind of result when we took it. I would rather have the chair back than the money it brought. But those are the chances you take when you send things to auction. In fairness, I would have been happy if the tea poy had brought half of what it did and thought the total of all the items might bring what it did. Therefore if you look at the bottom line, we were happy with the final results. You have to be able to do this and not worry what individual items bring.

If you have things you would like to auction or just want to attend a neat auction gallery, may I suggest you visit Gallery 63 in Atlanta. If you can’t, be sure and watch the “Auction Kings” on the Discovery channel. 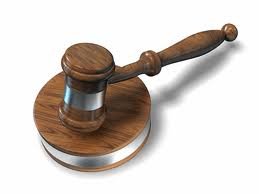 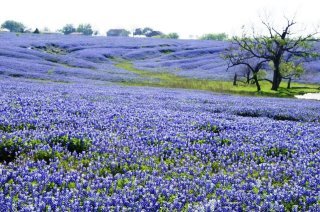 Events and News About Antiques 0
If you have never attended the spring Round Top Antiques Week, you have short 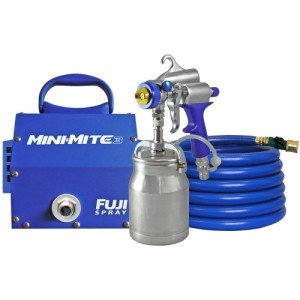 Antiques Refinishing, Restoration, and Care 0
Refinishing antique furniture can be a very rewarding experience. If you have not read my 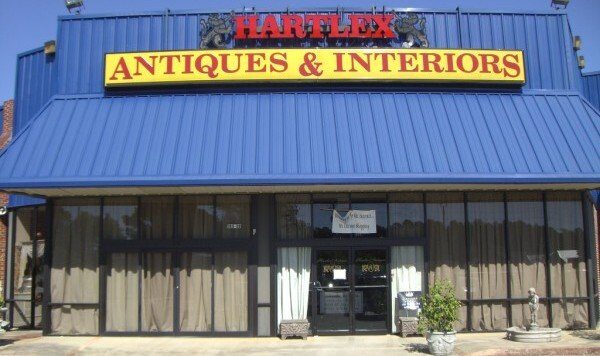 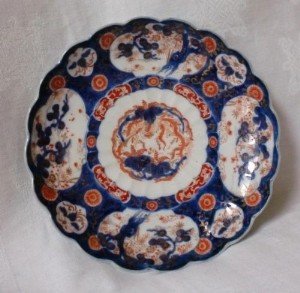 Popular Antiques to Buy and Sell 0
Imari, the beautiful and colorful Japanese porcelain is a very popular collectible today. It